Elizabeth Abbott, from the Office of the Patient Advocate (OPA), spoke to the CA health insurance agents on Tuesday, May 17 at the CAHU Capitol Summit. She has a history of advocating for California health care consumers. 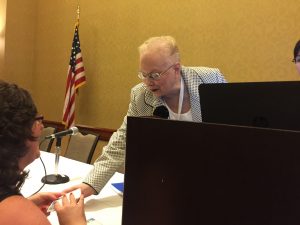 Abbott has directed the OPA for a little over a year. Before that, she was appointed as one of the 16 national consumer representatives to advise the National Association of Insurance Commissioners (NAIC) counseling them on the implementation of the Affordable Care Act (ACA). She also advised on insurance market reforms and other consumer issues related to California health care.

Abbott worked for Health Access California (HCA), the consumer coalition working for access to quality and affordable California health care for all. Also, she worked for the Center for Medicare and Medicaid Services (CMS) as a regional administrator for the west including California, Hawaii, Nevada and more.

Abbott declared to a room full of CA health insurance agents, “I asked to talk to you. I was not dragged into this. I consider you our sales force.”

She went on to describe the California health care “Report Cards” put out by the OPA. The OPA evaluates HMO’s and PPO’s in California along with 207 of the state’s largest medical groups. Abbott says, “We only pick on big guys. We’re not trying to disadvantage little guys that may just deal with aids patients, etc.”

On their report cards, they give 4 star ratings on 2100 data points for the 16.7 million consumers who get health care in California. The OPA may move to a 5 star rating in order to align with other data reporting agencies in the state. However, Abbott says, “It’s hard to convert from four to five stars. It causes some statistical issues.”

The OPA has the #1 rated health care report card in the United States. That’s good news for CA health insurance agents who have this tool at their fingertips. OPA publishes their results on their website: http://www.opa.ca.gov/. The results are laid out in an easy-to-understand way. Visitors can use various tools for sorting and filtering. Currently, the OPA now has a Medicare report card as well.

The report did not include mental health, or substance abuse. Also, the cost of California health care report removed “million dollar babies” from the data, so as to not confuse the data by including infrequent, but ultra-high birth costs.

The OPA offers the only report card in the nation (with the exception of Minnesota) that includes cost of care statistics.

Ms. Abbott commented, “There is not much connection between what you pay in premiums and health care outcomes.” Just because a California health plan is charging high premiums doesn’t mean that its members are healthier. And, just because a health insurance carrier is charging more affordable rates does not mean they are offering inferior care as it relates to health outcomes.

As a CA health insurance agent, you’re looking to get the best California health care outcomes at the most affordable rates for your clients. Doing research through the Office of the Patient Advocate can be very helpful.

On the OPA website, you can find out which California medical plans are doing the best related to various health care outcomes such as cancer treatment, cardiac and diabetes. When you get health insurance quotes, you’ll find that sometimes the more affordable health plans actually are providing the best California health care.