Effective January 1st 2017, most California private health insurance rates will increase an average of 13.2%. The actual rate change will vary, based on:

In a few cases, monthly rates will go down; in most cases, the rates will go up, some as much as 36%. For many consumers, this may mean making drastic changes to ensure that their health plan is affordable. See below for a breakdown of rate changes, as well as tips on how to minimize your 2017 Covered California rate increase.

How the Carrier You’re with Impacts Your Rate Increase

Covered California Plans whose overall rate increases are modest improves the likelihood that your 2017 rate increase will be minimal, regardless of where you live. According to the California Health Benefit Exchange, the carriers with the lowest rate increases are Valley Health (0.7%), L.A. Care Health Plan (3.7%), Molina Healthcare (5.2%), and Kaiser Permanente (5.6%).

Here is a chart of the 2017 average rate change for the top four California carriers, according to the Health Benefit Exchange:

TIP: One big way to reduce your 2017 rate is by switching carriers. If you’re enrolled now, during renewal you can shop for plans and make changes during the 2017 Covered California open enrollment period for a January 1, 2017 start date. Do not submit a new application, but make this change in your existing Covered CA application account. If you’re not currently insured on a private plan, you can enroll during the Open Enrollment Period, which starts November 1, 2016.

How the Plan You’re on Affects Your Rate Increase

TIP: Minimize your 2017 rate increase by switching from a PPO to an EPO or HMO plan. Even if you have to switch plans, you may be able to keep your favorite doctor if he accepts an EPO or HMO plan. Ask your doctor which insurance companies he or she accepts whether it’s an EPO, HMO or PPO so you’ll be ready to shop for plans in October-November.

Another way your plan choice can affect your rates is by the level of metal plan you’re on. Plans like the Covered California Gold and Platinum don’t carry deductibles so you pay lower copays or services fees, but the monthly premium is more expensive.

Where You Live Affects Your Rate Increase

Just as doctor and hospital costs vary by demographics, so do insurance premiums. See the chart below for the 2017 average rate change per county, according to the California Health Benefit Exchange: 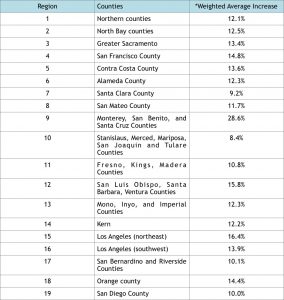 *The % of increase may be lower or higher in parts of the counties; the average increase is as listed.

Those living in Monterey, San Benito, or Santa Cruz counties (Region 9) may be hardest-hit by the 2017 rate increases. Their health insurance rates will increase an average of 28.6%, with some rates going up as much as 36.4%.

If you need personalized assistance, contact Health for California Insurance Center at 1-877-752-4737 starting in October when the new 2017 rates become available.