The 2017 Obamacare Open Enrollment Period begins November 1, 2016 and goes until January 31, 2017. For health insurance consumers, they will have three months to apply for Obama Care.

During the 2017 Covered California open enrollment period, consumers can apply for health insurance or change plans without having a qualifying life event.

Covered California rates are going up on average 13% in 2017, so many consumers are expected to make changes in order to lower their monthly premiums. Most of this movement will occur during the 13 weeks of the 2017 Open Enrollment Period. 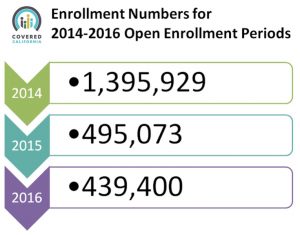 If you’re currently on Anthem or Blue Shield, it might be time to think about switching carriers as their rates will be hardest hit. Anthem Blue Cross rates in California are going up on average 17.2%, and Blue Shield California rates are going up an average of 19.9%.

Some individuals and families apply for health insurance outside of the 92 days of Obamacare Open Enrollment, during what is called the Special Enrollment Period (SEP). To apply during SEP, you will need a qualifying life event such as marriage, adoption, relocation or loss of coverage.

2017 will be the fourth Obamacare Open Enrollment Period. The largest influx of new applications came during OE 2014 when so many new enrollees were entering the state and federal exchanges.

In 2017, we are expecting a lot of people to change plans. There will likely be movement from PPO’s to HMO’s as well as movement from Anthem Blue Cross / Blue Shield to more affordable carriers like Kaiser Permanente and Molina Healthcare.

As far as the number of new enrollments in 2017, that is difficult to predict. Each year more and more have entered the health insurance marketplace leaving fewer and fewer uninsured.

The increasing severity of the penalty may have gotten the attention of many uninsured in the market. So, we may see these individuals sign up during the 2017 Open Enrollment Period to avoid getting the penalty for no health insurance in future years.