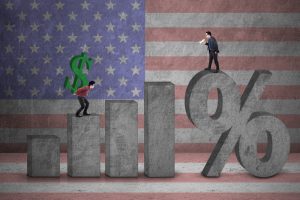 When Covered California announced that there would be a rate hike for 2017 that averaged 13.2%, Californians were understandably upset. But residents don’t have to look far to realize that it could be a whole lot worse.

Covered California’s health insurance exchange operates as the best in the nation, according to Janet Trautwein the CEO of the National Association of Health Underwriters (NAHU). Trautwein spoke about double digit rate increases for individual plans across the nation at the North Coast Association of Health Underwriters (NCAHU) 2016 Educational Symposium Program on Sept 22, 2016.  She stated that other states in the nation will experience an average increase between 20 – 30% in 2017.  She also pointed out that for some states the rate increases will be even higher. A recent article by Guy Benson on Townhall.com showed that Arizona, Minnesota, Oklahoma, and Tennessee will have average rate increases over 50% for on exchange individual plans this coming year.

Covered CA says that the 2017 rate hike will be temporarily high this year due to some funding set to expire at the end of 2016, high costs of prescription drugs, and possible fraudulent use of the Special Enrollment Period by consumers. They expect the following year’s rates to have a more normal average increase. When Covered CA began, the annual average rate increases for 2015 and 2016 were about 4.0%. The 13.2% 2017 rate hike brings the 3 year average rate increase up to 7%.  See the chart below from news.coveredca.com that compares the rate changes over the past 3 years: 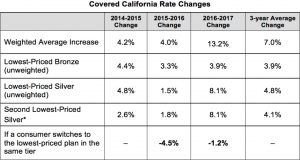 In the 3 previous years before Obamacare in California began, residents were seeing their health insurance rates increase by an average of 10 – 12% annually. So when considering Covered California’s initial 3-year average change in rates, 7% is significantly lower than rate increases before the Affordable Care Act became law, and Californians can be glad that their rates are increasing at a much lower level when compared across the nation.

Related Articles: 2017 Covered California Rate Increases,Obamacare Rates 2017: Why are the going up?