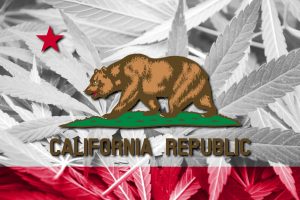 On the Nov. 8, 2016 California General Election ballot is Proposition 64 also known as the Adult use of Marijuana Act.  This measure would legalize the recreational use of Marijuana for adults aged 21 and older.  Adults would be able to grow, possess, and use marijuana for nonmedical purposes with some restrictions.  State agencies would be required to license and regulate marijuana growing businesses. State taxes would be imposed on marijuana sales and cultivation and local regulation and taxation would be allowed.  Prop 64 prohibits marketing and advertising directly to minors and authorizes resentencing and destruction of records for prior marijuana convictions.  The penalties for driving a vehicle while under the impairment of marijuana (which are the same as driving under the influence of alcohol) would remain unchanged by this law.

The California’s Voter Information Guide for Nov. 8, 2016 shows what activities are allowed and not allowed if Proposition 64 passes:

In California, the use or possession of marijuana is generally illegal.  Possession is punishable by a fine and growing or selling marijuana could result in imprisonment.  In 1996 California legalized the medical use of marijuana in the state even though any marijuana use is currently illegal by Federal law. So far, the Federal government has not pursued enforcing the federal law in California except for certain circumstances such as when related to minors using marijuana or the transportation of marijuana to other states.  State and local sales taxes are currently being collected on medical marijuana and are estimated in the tens of millions of dollars annually.

The fiscal impact from Proposition 64 depends on various variables, but it has been estimated that eventually the state and local agencies could receive tax revenue that ranges from the high hundreds of millions of dollars to over $1 billion annually.  Additional state and local savings are projected from reductions in criminal justice costs in the tens of millions of dollars annually.

The funds from the new state taxes and fines collected would be first used to pay back state agencies for marijuana regulatory costs and then allocated for specific purposes as indicated by the Nov. 8, 2016  California’s Voter Information Guide  table below:

The remaining revenues would be earmarked for specific purposes such as youth programs, environmental protection, and law enforcement.