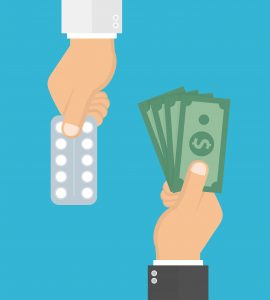 The Drug Price Standards Initiative, Proposition 61, will appear on the ballot this November as an initiated state statute for Californian voters.  A “Yes” vote on Prop 61 supports regulating drug prices by requiring state agencies to pay the same prices that the U.S. Department of Veterans Affairs (VA) pays for prescription drugs. While a “No” vote on Prop 61 opposes this measure.

This measure is all about drug costs for California state agencies such as Medi-Cal and the Public Employees’ Retirement System (CalPERS).  It does not apply to drug costs paid by individuals but only state agencies.  Currently in California, state agencies negotiate drug prices with manufacturers to try to get discounts and lower prices. It was estimated in 2014 – 2015 that we spent almost $3.8 billion on prescription drugs statewide.  Of that $3.8 billion, nearly 83% was spent for Medi-Cal and CalPERS. Proposition 61 is aimed at putting restrictions on the amounts that state agencies can pay for drugs. Specifically, these agencies would not be able to pay more than the lowest price paid by the U.S. Department of Veterans Affairs (VA). Medi-Cal managed care programs would be exempt from Prop 61 drug regulations.

Experts could not determine what fiscal impact this measure would make on the state due to numerous factors. The measure does not restrict what manufacturers can charge for their drugs but only what state agencies could pay.  Manufacturers of drugs could respond in various ways which makes it difficult to determine what potential savings the state might receive.

As of October 16, 2016 the AIDS Healthcare Foundation contributed $14.4 million and the California Nurses Association PAC contributed $50,000 in the campaign to support Proposition 61.

As of October 16, 2016 the top 10 donors for the campaign opposing Proposition 61 had donated $54 million.  These donors are all pharmaceutical companies or companies with interests in the pharmaceutical drug industry.